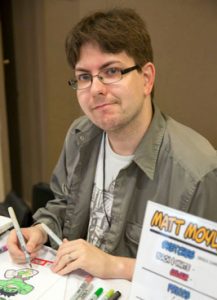 Hi! I’m a writer, illustrator, and editor who has been working in the comic/artwork/publishing industry for over 15 years now. I’ve been lucky enough to be involved in a plethora of great comic book series, art books, manga, and other projects, including Transformers, Street Fighter, Teenage Mutant Ninja Turtles, Mega Man, WWE Wrestling, Neon Genesis Evangelion, Robotech, World of Warcraft, Yu-Gi-Oh!, Gears of War, Shovel Knight, Persona, Marvel, and many others.

While primarily working on the project management/editorial side, I’ve tried my hand at everything from colouring, inking, and lettering to graphic design and even some occasional illustration work.

I’m currently the Director of Publishing for UDON Entertainment’s publishing division, and also do freelance work on a variety of different projects. 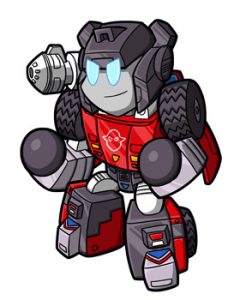 ABOUT LIL FORMERS
Lil Formers is a parody comic strip created, written, drawn, inked and coloured by me. It started off poking fun at all aspects of Hasbro’s Transformers mega-property (hence the ‘Formers’ in the title). Strips #1 to 100 are all TF-centric, but with Strip #101 onward, I expanded the scope to cover all geeky, pop culture properties. So cartoons, comics, toys, video games… it’s all fair game. I haven’t updated the actual strips in a while but still continue to draw when i have the time.

As a comic strip, Lil Formers started out as a piece of fan art I drew of the Transformes character Shockwave. I was really just taking a shot at drawing a Transformer for the first time, and since all I can draw half-decently is the cutesy “chibi”-style (just an amateur artist here guys!) that’s the style I went for. Well, Shockwave seemed a hit with TF forum posters, and after a few follow up strips it turned into a series. Yay!